Michael and Alfie did it again! Their fourth album is a UK number one chart success!

Their concert DVD is also topping the DVD charts just as the Les Mis in Concert album.

So well deserved! A proud day to be a fan.

You can read more and watch a little message here. 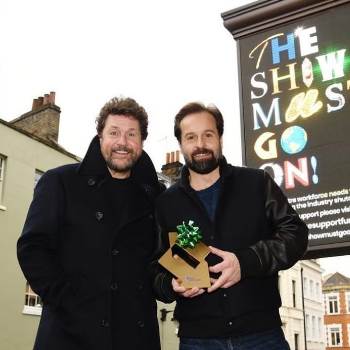 Michael and Alfie are popping up all over the media landscape. Best check out our Facebook group where Mark kindly keeps us all posted. :-)


Just a reminder. Michael was supposed to be giving an interview in front of a live audience next Wednesday. Due to the Corona restrictions and closures Chichester Festival Theatre decided to make a livestream of it. So everyone worldwide will be able to watch the interview from their homes on 25 November 2020 from 2.30pm.

You can order the streaming ticket here. 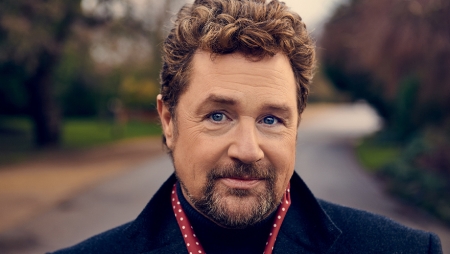 Among the dozens of news recently this one was a bit overseen by us. Michael joined Marisha Wallace (Motormouth Maybelle in the upcoming Hairspray production) to duet on "The Show Must Go On". The album will be released on 27 November 2020

You can order it here. 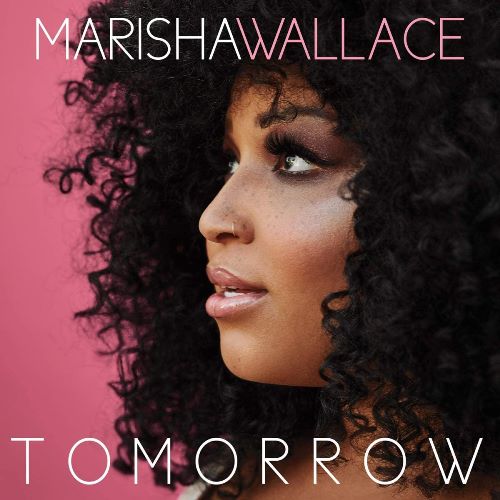 Sadly there can't be the usual Children in Need Luncheon due to Corona, but Michael and Radio 2 came up with an alternative idea. Some lucky winners can be part of a small Zoom Party with Michael and other guests.

You can find more information about how to enter here. 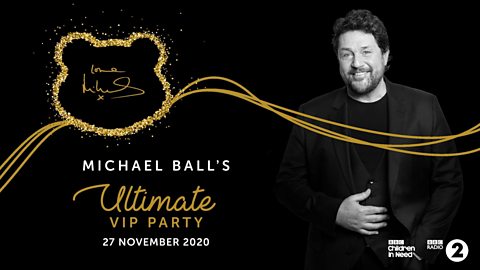 The news we haave all been waiting for: After reaching #2 in the cinema charts you can now own the last night of this year's Ball & Boe tour at the London O2 on DVD!

Michael Ball & Alfie Boe: Back Together - Live in Concert will be released on 16 November 2020.

You can order your signed copy here here. 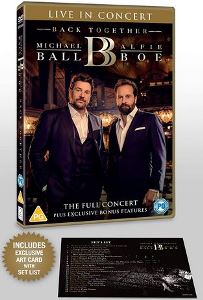 Michael and Alfie have been back in the studio and recorded a Christmas album to be released on 20 November 2020. 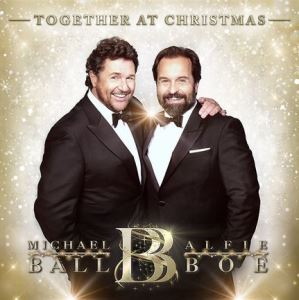 If you pre-order by 3pm on 26 October, you will be eligible for early access for concert tickets. Yes, they are going on a UK / Ireland tour as well in November / December 2021. 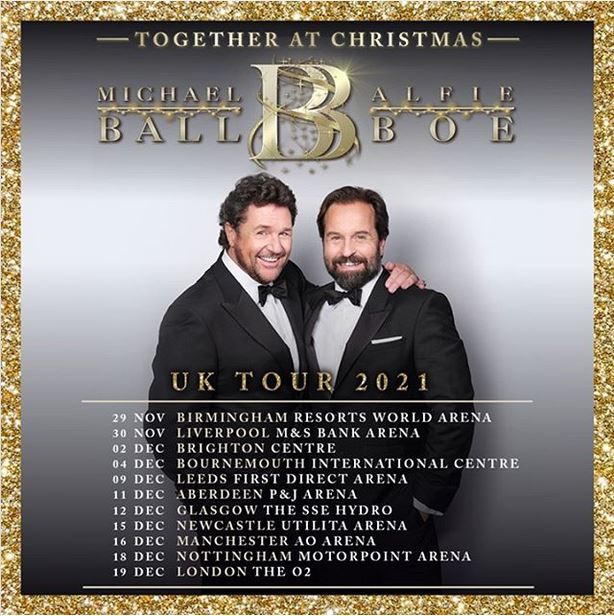 And another big news item has come up as the results of Michael and the cast of Les Mis performing at Britain's Got Talent finale. Michael alongside Cameron Mackintosh announced, that there is only one way they could get this show back on stage and that was the All-Star concert version we were treated to in 2019. And they will do exactly that.

For a limited season of six weeks commencing on 5 December they will perform the concert version at the Sondheim Theatre. Tickets will go on sale on Wednesday 14 October 2020 Saturday 10 October 2020. 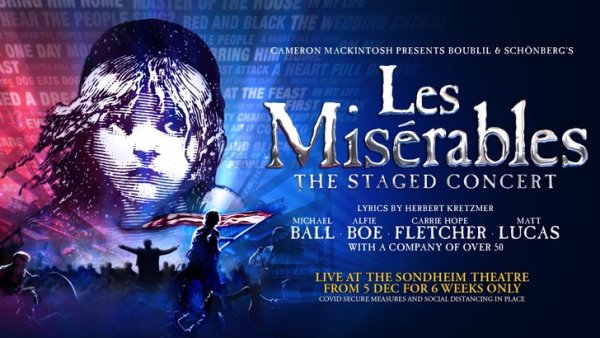 Some more great news. Not only will we get a cast recording of the Staged All-Star Concert from last year, no, we already have it. The recording was just published and can be ordered via several sources. Saturday 10 October 2020. Be sure not to miss it and tune in at 7:30pm on ITV1. 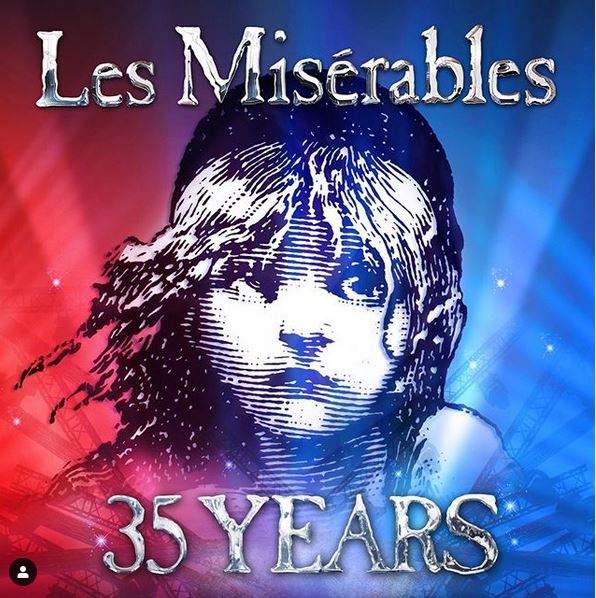 Michael will be back on the Britain's got Talent stage for the big final show on Saturday 10 October 2020. Be sure not to miss it and tune in at 7:30pm on ITV1.

We will see performances from the shows Les Misérables, Mary Poppins and Phantom of the Opera. Michael will be joined by members of the brilliant all-star cast we were able to enjoy last year. With him, gracing our TV screens will be: Carrie Hope Fletcher, Matt Lucas, John Owen Jones and Shan Ako. 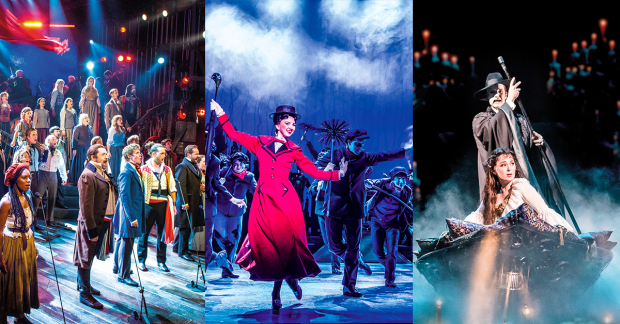 Michael will once again be co-hosting The One Show from Monday though to Thursday from 12 October till 15 October.

He will also be back from 9 November till 12 November. 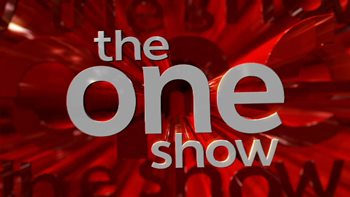 Michael will come to the Chchester Festival Theatre to be interviewed by Ed Seckerson for a short Interviews-series the Theatre will be hosting in November. The Interview will take place on 25 November 2020 at 2:30pm.

Tickets will be available to the General Public from 2 October 2020 at 9am from the official website. 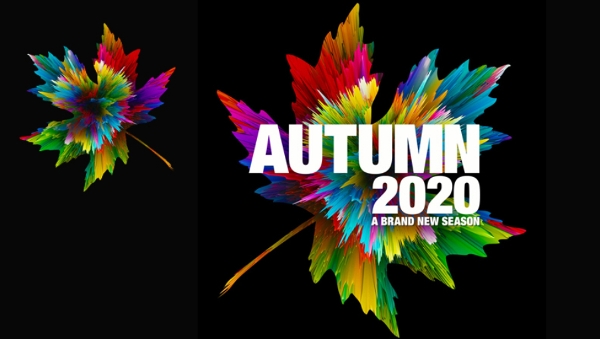 Michael and the cast of Hairspray will perform You Can't Stop the Beat on the Britain's Got Talent semi-finals on Saturday 26th September from 8pm on ITV1. The performance was pre-recorded.

Michael will be co-hosting The One Show from Monday though to Thursday from 24 August till 27 August. So tune in at BBC One, 7:00pm.

The cinema screening of Back Together has been pushed back to 17 October to give more cinemas the chance so show it. 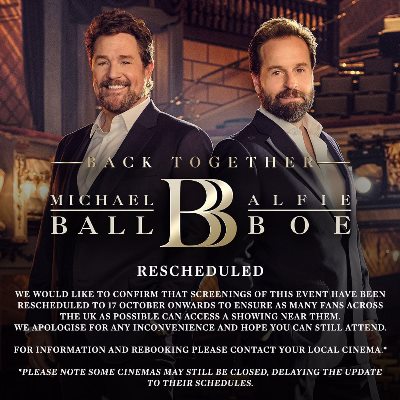 Michael kindly donated two items to the good cause:


Michael will be co-hosting The One Show from Monday though to Thursday from 27 July. So tune in at BBC One, 7:00pm.

Michael will not be appearing in Hairspray on the following dates:


Trust Baz Bamigboye to have to scoop. Here's his tweet regarding the new Hairspray dates:

Michael will be co-hosting The One Show from next Monday to next Thursday. So tune in at BBC One, 7:00pm.

Michael will be co-hosting The One Show for the whole week. So tune in at BBC One, 7:00pm.

Michael will be hosting a BBC News Special called Captain Tom: We Salute You tomorrow on BBC One at 7:30pm 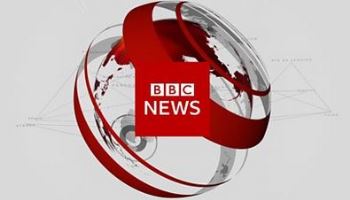 The wonderful Noel Fitzpatrick released a series of podcasts on animal lovers called Animal People with Supervet Noel Fitzpatrick and, of course, his good friend Michael could not be left out.

So lean back and enjoy this very candid 40 minute interview on much more than Michael's beloved Tibetan Terriers:

You can also visit the website to listen to the other five episodes.


They did it! The single You'll Never Walk Alone really did reach #1 in the UK Single Charts! Congratulations!

Read all about it here. 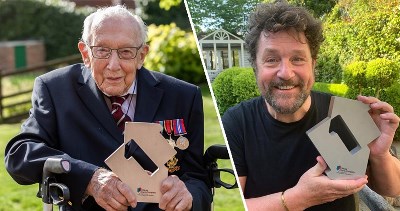 It has been announced today that despite the release of the DVD/Blu-ray of the sensational The Staged Concert having been postponed, you can still download it to own digitally now (when in the UK). Profits will help artists and the NHS.

Read all about it here. 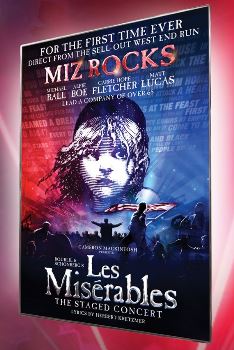 Michael and Captain Tom Moore have teamed up and released their duet of You'll Never Walk Alone, which you can buy as a download and all profits will go to support the NHS.

Number 1 on the iTunes chart with @mrmichaelball and the NHS Voices of Care Choir, and 20 MILLION POUNDS for the @NHSCharities !

The release of the DVD/Blu-ray of the sensational The Staged Concert has been postponed to 2 November 2020. In positive news: it comes with the brochure and the Blu-ray is region free, so can be played all over the world.

You can order it here. 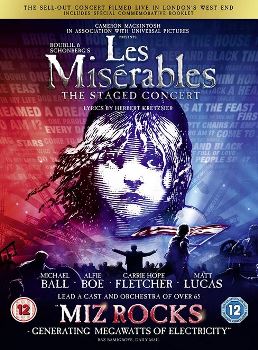 Baz Bamigboye from the Daily Mail has just tweeted this (and he is usually spot on):

Michael and Alfie had a lovely 15 minute video chat to brighten all our days and they also showed a teaser of the upcoming cinema release of their O2 concert. Enjoy!


Michael will be appearing on The One Show tonight, so tune in on BBC One at 7pm.

He has also been active on social media and here a a few videos to cheer everyone up:

In case you needed a good laugh today, or some #ThursdayMotivation, here are some bloopers from our trailer shoot for Michael Ball and Alfie Boe: Back Together - screening in cinemas 12 & 13 September!
Something to look forward to 🤗🥳🥰@AlfieBoe @mrmichaelball pic.twitter.com/mUxV3ul86i

A message from Mama is just what we needed 😍

It has been announced that in light of recent events Michael's and Alfie's O2 concert will now be shown at UK and Ireland cinemas on 12 and 13 September. 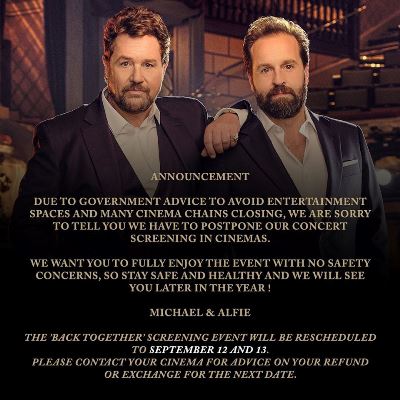 A few words by the main man and a petition to sign:

I’ve been lost for words and am, in equal measure, inspired and appalled but the things I read and learn every day. That’s why I’ve not tweeted for a while. My feelings today? We must not despair but we must respond with community, integrity, intelligence. Stay safe ❤️

Boris Johnson: Leisure venues need to be closed by law due to the coronavirus to safeguard jobs. - Sign the Petition! https://t.co/YWaahMZDbQ via @UKChange

Fantastic news, as released on the website of the Royal Academy of Music:

At the musical theatre graduation ceremony on 9 July, stars of stage and screen Michael Ball and Matt Lucas will be awarded Honorary Membership of the Royal Academy of Music (Hon RAM). Michael Ball has enjoyed a long career as a singer and broadcaster, first appearing on the original cast recording of record-breaking musical sensation Les Miserables.

Michael and Alfie will chat about their upcoming tour on Good Morning Britain tomorrow (3 February) between 6am and 9am on ITV1.

On 14 February Michael will once more be co-hosting The One Show on BBC One at 7pm.


Michael's and Alfie's O2 concert will be shown at UK and Ireland cinemas on 28 and 29 March. Find a cinema near you here. 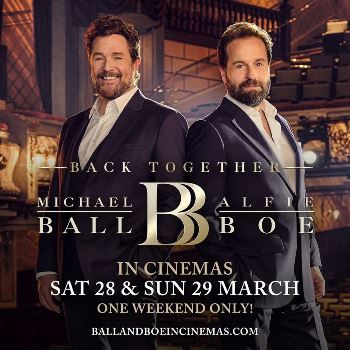 Absolutely thrilled to share with you that @AlfieBoe and I will be #BackTogether on the big screen! Our final show at London's O2 Arena will be screened in cinemas around the UK & Ireland on 28th & 29th March. For tickets visit https://t.co/tx1HfiU68d See you at the movies! pic.twitter.com/z66HeLek1C

On Friday Michael will be co-hosting The One Show again. So tune in at 7pm on BBC One. Read about it here. 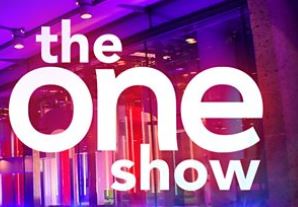 Probably the final news item in the old year (the other news items were moved into the archive):

You can listen to the amazing staged concert of Les Miserables on 5 January, 5pm on BBC Radio 2. Matt Lucas will host the braodcast. Read more about it here and on What's on Stage. 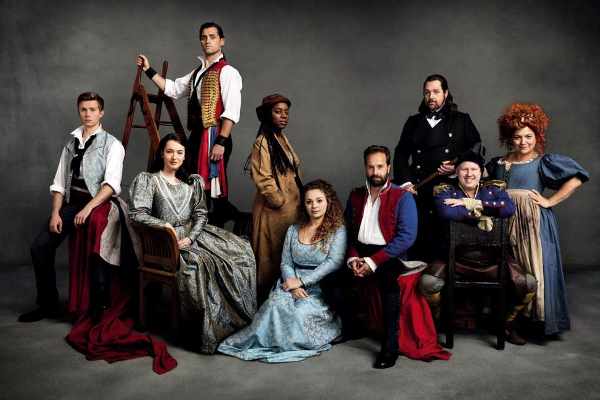 And if you missed Michael and Alfie on Lorraine, here's the video of the interview:

This is not an official website. Michael Ball does not own, control, authorize or endorse it, nor is he responsible for its contents.

Any emails sent to this website will NOT be forwarded to Michael Ball..